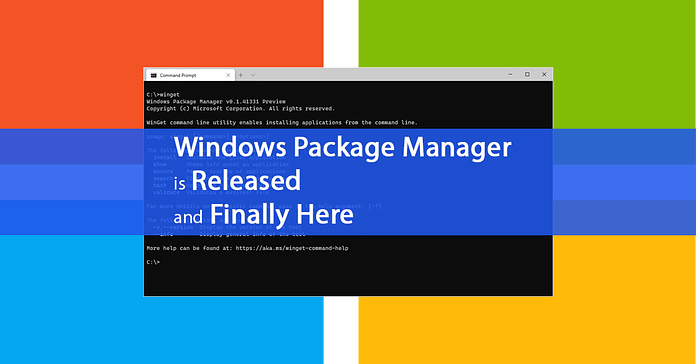 The release was recently announced at Microsoft Build 2021. The command line client is called “winget”. Windows Package Manager basically is a command line utility to make installing software and programs.

This was already in development for almost a year now and was available to Windows insiders and users who were already signed up for Windows Package Manager. According to Microsoft, the package manager has over 1400 unique packages when they were announcing its release. This will mostly help IT administrators who need to install or update large number of systems at a time but individuals can get the benefit too.

Also Read: What is Windows Package Manager and How to Use winget?

This package manger is going to be included in an Automatic Update soon and any system with Windows 10 version 1809 or later will get it. Since version 1809 is years old already, pretty much all the systems will get it unless you have a really old machine without any updates. But incase you want to experience it earlier than that, you can download it using Microsoft Store and download App Installer.

Microsoft has created a tool to submit packages to their Repository and they are calling it Windows Package Manager Manifest Creator. With the manifest creator tool any developer can create and submit package.

Samir Maharjan - January 9, 2021
0
Twitter permanently banned President Donald Trump on Friday, days after a pro-Trump mob stormed the US Capitol leaving five dead.“After close review of recent Tweets from the @realDonaldTrump account and the context around them we have permanently suspended the account due to the risk...
Read more

Samir Maharjan - February 23, 2021
0
If you do not accept the changes by May 15th, you may risk getting your WhatsApp account deleted eventually.
Read more

Samir Maharjan - January 6, 2021
0
There are situations where you would want to clone the entire drive. Whether you are upgrading or migrating the entire windows installation, disk cloning is your way out.There are a lot of great services in the market that does the job done perfectly...
Read more

Samir Maharjan - May 10, 2021
0
Check out the list of 5 of the very best websites to watch free movies online in 2021. The website list will keep you entertained with all the new movies.
Read more
© 2023 GeekCrawl.com - All Logos & Trademark Belongs To Their Respective Owners