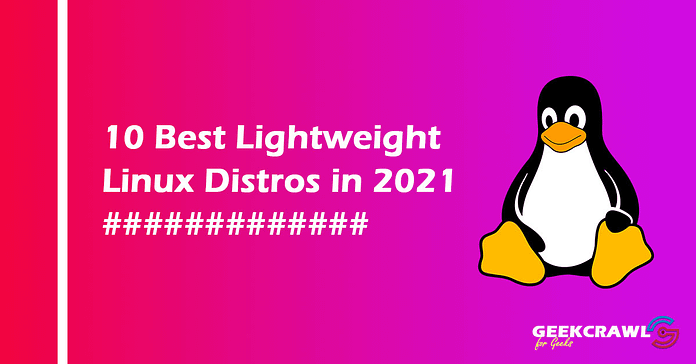 What do you do with your old computers the ones which once had good hardware configuration but now potentially outdated? Why not revive your old computer with Linux. I am going to list the best lightweight Linux distros that you can use on all computers while our focus is on older computers.

Peppermint is a cloud-focused Linux distribution that doesn’t need high-end hardware. It is based on Ubuntu and uses LXDE desktop environment to give you a smoother experience. Originally created with the web-centric approach of netbooks in mind peppermint includes nice application for integrating any website or web app as a standalone desktop app. You’ll find the documentation helpful as well a dedicated forum also exists to help troubleshooting issues and answering your questions.

Linux Lite is among the lightweight Linux distros that do not need high-end hardware to run it. Linux Lite is based on Ubuntu and its long-term support releases. It comes baked with some essential tools for the general users such as Firefox, Thunderbird, Dropbox, LibreOffice, VLC media player, etc.

Considering that it is based on Ubuntu, you will have plenty of support and resources available online as you can follow the Ubuntu tutorials.

MX Linux is a mid-weight Linux distribution that combines stability, high-performance simplicity, and elegance to give you a reliable OS that works out of the box with pre-installed applications such as VLC media player Firefox web browser LibreOffice suite, and thunderbird to mention a few. it’s built on Debian 10 buster and ships with an XFCE desktop environment that is low on resource usage like many of the lightweight editions. It’s available in both 32-bit and 64-bit versions.

Slax is a really portable lightweight Linux distro based on Debian which you can use it on a USB drive without installing the ISO. File size is just under 300 megabytes which makes it a great option for older computers. the user interface is simple and usable with essential pre-built packages for an average user. You can even try to customize the OS and make permanent changes on the fly if you require it.

Zorin OS Lite is another lightweight Linux distro that runs smooth and fast on machines as old as 15 years. This distro has a Windows-style desktop layout which makes it ideal for Windows users as this will make the transition from Windows to Linux easier. it is also an ideal Linux distro for beginners as it has a simple but attractive user interface which makes it easier to use and get used to.

Next on our list of best lightweight Linux distros is Lubuntu as the name suggests a member of the ubuntu family but utilizes either LXDE/LXQT desktop environment. From ubuntu 18.10 and above, you will find LXQT as the default desktop environment and could find LXDE as the default in its previous releases. Lubuntu is one of the lightest derivatives of ubuntu so it specializes in speed and the support for older hardware.

Yet another light Linux distribution Bodhi Linux that gives life to older PCs and laptops. Bodhi Linux is quite known for its minimal approach and the support for low-end hardware. It doesn’t feature a lot of things pre-installed hence you will notice that the ISO file size will be less than one Gigabyte. The presence of Moksha desktop makes Bodhi Linux a decent choice for older hardware configurations while providing a good user experience.

Sparky Linux is another lightweight distro but at the same time, it also targets modern computers depending on what you need. You will find two variants of Sparky Linux; one based on Debian stable release and the other based on Debian’s testing branch so you can opt for any one you see fit in addition to the variants you will also find different editions of ISOs to download.

Puppy Linux can be booted live with either a CD, DVD or USB. Puppy Linux uses JWM and open box window managers by default which makes it very easy on system resources. It does have some basic apps though in other words, it can get your work done if you want to utilize a really old computer probably.

Tiny Core Linux is technically the most lightweight distro there is. However, it isn’t a complete Linux distribution for an average desktop user. It simply incorporates the fundamental core of an OS which includes the kernel in the root file system. In other words, it features the foundation of a desktop OS if you simply want a system to boot up coupled with a wired internet connection. you can get started using it but you should not expect proper hardware support out of the box so if you’re someone who knows how to set up or compile tools necessary with Tiny Core Linux to make it a complete desktop experience you can give it a try

Most of the mentioned lightweight Linux Distros should be easy to install on older computers without any hassle. If you’re inclined to a good user experience, Easy to use UI and stability, give the list a try.

Samir Maharjan - December 21, 2020
0
Facebook has launched its collaborative music video app “Collab” for iOS users. With the help of this app, you can create a short music video by mixing up three single videos. “Collab” is now officially launched on Apple App Store in the US.The users can also...
Read more

Samir Maharjan - January 9, 2021
0
Twitter permanently banned President Donald Trump on Friday, days after a pro-Trump mob stormed the US Capitol leaving five dead.“After close review of recent Tweets from the @realDonaldTrump account and the context around them we have permanently suspended the account due to the risk...
Read more

How To Mine Dogecoin – 2 easy ways! For Beginners

Samir Maharjan - February 14, 2021
0
learn how to mine dogecoin. This guide for beginners will help you learn mining Dogecoin with Easyminer or CGminer. Read the full guide here.
Read more