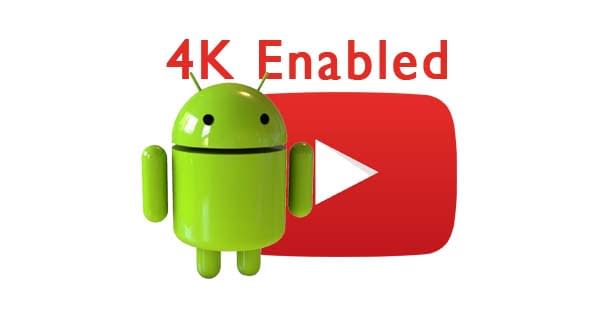 YouTube has unveiled a new feature for Android users. This feature allows you to watch videos at 4K in YouTube Android app with HDR at 60 frames per second, even on devices without a 4K capable screen.

Until this update, Android users have only been able to watch high quality videos on the 1080p screen, but now they will be able to watch videos in the 4K (2160p) streaming option. Most of the current smartphones have the facility to watch video in 1080p (Full HD) and 720p resolutions.

Google has launched this new streaming option from the server side update, meaning users do not need to update their app to use the feature. However, Not all users will be able to use this feature. Only the users who already have FHD (Full High Definition) 1080p display on their smartphone can now find an option to watch 4K videos with HDR in YouTube.

On the other hand, The company said that the internet connection should be good for watching 4K videos. Last year, YouTube introduced the 4K playback feature for iOS users.

How To Mine Dogecoin – 2 easy ways! For Beginners

Samir Maharjan - February 14, 2021
0
learn how to mine dogecoin. This guide for beginners will help you learn mining Dogecoin with Easyminer or CGminer. Read the full guide here.
Read more

Samir Maharjan - January 6, 2022
0
Will your PC run Windows 11, the latest operating system by Microsoft. Find out how you can check if your system is ready to install and run Windows 11.
Read more

Samir Maharjan - January 6, 2021
0
WhatsApp users are now mandated to sharing data with Facebook. WhatsApp users all over are receiving overlay notice over its app asking to agree the changes made to the policy.
Read more
© 2023 GeekCrawl.com - All Logos & Trademark Belongs To Their Respective Owners