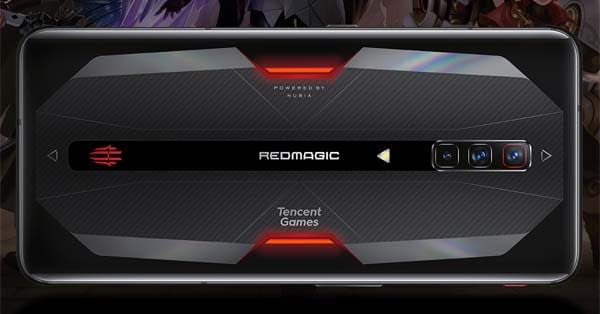 The company has unveiled two smartphones in the form of Red Magic Six series powered by the beefy Snapdragon 888 processor. These include Red Magic 6 and Red Magic 6 Pro. Both of these gaming smartphones have 6.8inch Full HD Plus AMOLED displays boasting a resolution of 1080 x 2400 pixels. Both have a refresh rate of 165 Hz. This is the first of its kind to have such high refresh rate.

Also, these phones have touch choreographer technology. Apart from this, there is also intelligent adaptive technology, which adjusts the refresh rate of the display based on your needs. The response rate of the phone is 8ms helping gamers to perform better with fast paced games.

Apart from this, both phones also have CPHY-DSI technology that basically doubles the transmission rate of high quality images.

These series phones have the new ICE 6.0 multi-dimensional cooling system. The company claims the Inbuilt turbo fan is kept at 20,000 rpm giving users stable performance across the board.

Prices for the Red Magic 6 start at 4,399 yuan in China. Both the smartphones will go on sale in China from March 11.But so far no information has been received about these phones going public worldwide.

The phone comes in 8GB / 12GB / 16GB / 18GB RAM variants. Similarly, in terms of storage, it is available in 128 GB / 256 GB / 512 GB variants. The phone has Android based Red Magic OS 4.0. Both phones with in-display fingerprints will have three microphones as well as stereo speakers.

As far as the camera is concerned, both the phones have three cameras on the back. The main camera is 64 megapixels, the second is an 8-megapixel ultra wide and the third is a 2-megapixel macro lens. The phone has an 8-megapixel camera for selfies.

Samir Maharjan - January 25, 2022
0
The easiest way to install Windows 11 on unsupported PCs is by creating a Bootable USB drive is using Rufus that can bypass hardware checks.
Read more

Samir Maharjan - December 21, 2020
0
Spyware sold by an Israeli private intelligence firm was allegedly used to hack the phones of dozens of Al Jazeera journalists in an unprecedented cyber-attack that is likely to have been ordered by Saudi Arabia and the United Arab Emirates, according to leading researchers.In...
Read more

Samir Maharjan - January 6, 2021
0
WhatsApp users are now mandated to sharing data with Facebook. WhatsApp users all over are receiving overlay notice over its app asking to agree the changes made to the policy.
Read more

Samir Maharjan - May 30, 2021
0
Windows has finally released its own native package manager called Windows Package Manager. It is available now for Windows 10 users to use.
Read more

Samir Maharjan - January 9, 2021
0
Twitter permanently banned President Donald Trump on Friday, days after a pro-Trump mob stormed the US Capitol leaving five dead.“After close review of recent Tweets from the @realDonaldTrump account and the context around them we have permanently suspended the account due to the risk...
Read more
© 2023 GeekCrawl.com - All Logos & Trademark Belongs To Their Respective Owners