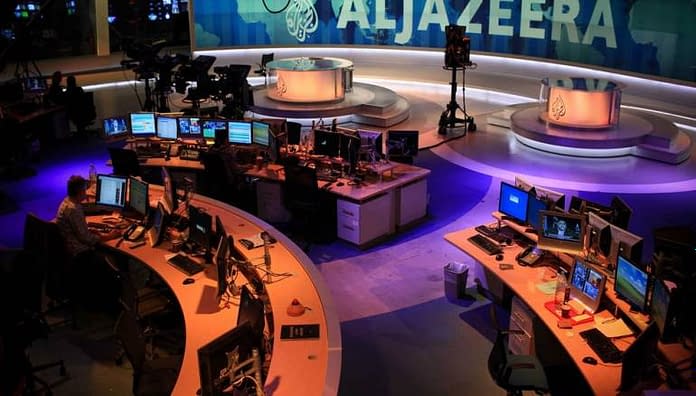 Spyware sold by an Israeli private intelligence firm was allegedly used to hack the phones of dozens of Al Jazeera journalists in an unprecedented cyber-attack that is likely to have been ordered by Saudi Arabia and the United Arab Emirates, according to leading researchers.

In a stunning new report, researchers at Citizen Lab at the University of Toronto said they discovered what appears to be a major espionage campaign against one of the world’s leading media organizations, which is based in Qatar and has long been a thorn in the side of many of the region’s autocratic regimes.

The report, written by some of the world’s top digital surveillance researchers, also raises troubling new questions about the apparent vulnerability of the Apple iPhone, which has sought to promote a reputation for security and commitment to privacy.

Researchers at Citizen Lab said the apparent malicious code they discovered, which they claim is used by clients of Israel’s NSO Group, made “almost all” iPhone devices vulnerable if users were using an operating system that pre-dated Apple iOS 14 system, which appears to have fixed the vulnerability.

NSO Group, whose spyware is alleged to have been used in previous surveillance campaigns in Saudi Arabia and the UAE has said that its software is only meant to be used by government clients to track down terrorists and criminals.

But the new allegation by Citizen Lab marks the latest in a long line of alleged human rights violations involving the company’s software on behalf of its clients including the alleged targeting of journalists in Morocco, political dissidents from Rwanda, politicians in Spain, and pro-democracy clergy in Togo.

In those cases, NSO Group spyware was allegedly used to target the individuals through a vulnerability in WhatsApp. which is suing the company in a US court. NSO Group, in turn, has said in court that its government clients, who it will not name, control how its spyware is used and deployed and that it investigates allegations of abuse.

In a statement to the Guardian, NSO Group said it was not familiar with the allegations. “As we have repeatedly stated we do not have access to any information with respect to the identities of individuals our system is used to conduct surveillance on. However, where we receive credible evidence of misuse, combined with the basic identifiers of the alleged targets and timeframes, we take all necessary steps in accordance with our product misuse investigation procedure to review the allegations”, a spokesperson for NSO Group said.

In the wake of the latest alleged attack Citizen Lab said the prevalence off the apparent vulnerability it discovered on iPhones, couples with NSO Group’s known global reach, meant it was likely that only a “minuscule fraction” of attacks on iPhone users had been discovered so far.

Samir Maharjan - May 18, 2021
0
Ventoy is an easy to use free tool that lets you create Multiboot USB drive. It can come in handy as bootable installation media and at the same time a rescue drive in case your computer does not boot and you have to fix it.
Read more

Samir Maharjan - May 12, 2021
0
For beginners, this is a tutorial on how to mine Dogecoin with the unMineable miner. It is the easiest way to learn and start mining Dogecoins in 2021.
Read more

Samir Maharjan - January 6, 2022
0
Will your PC run Windows 11, the latest operating system by Microsoft. Find out how you can check if your system is ready to install and run Windows 11.
Read more

Samir Maharjan - January 20, 2021
0
This method helps disable ads in Android Smartphones/Tablets, Windows PC and or over a network.
Read more
© 2023 GeekCrawl.com - All Logos & Trademark Belongs To Their Respective Owners