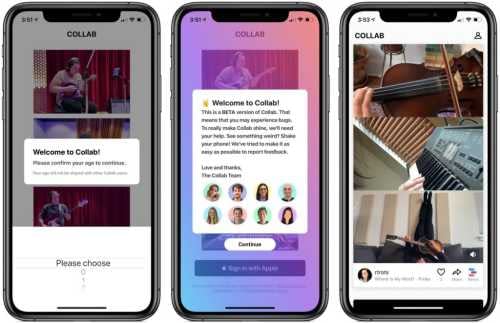 Facebook has launched its collaborative music video app “Collab” for iOS users. With the help of this app, you can create a short music video by mixing up three single videos. “Collab” is now officially launched on Apple App Store in the US.

The users can also post the music video in the public “Collab” feed, where all other users can watch it. We can say it is similar to TikTok as there is a feed of videos uploaded by users which anyone can browse.

In the Collab app, you can create your own video by splitting the three tabs and make one video. Or you can pick any clips from other users and create a new one. The app has in-app tools to sync the parts, so don’t worry about arranging the videos.

All the videos on Collab are public so that anyone can use them, and the original artist will get credits whenever their video is used. You can directly share the videos to social media platforms like Instagram, Facebook, and others via iOS Share. However, when the video is shared on any app, there will be a watermark of the app.

Collab app is available for free to download on App Store in the US. At present, there are no words by the company on when the app will be coming to other markets.

Earlier in May, Facebook launched Collab in beta version in the US and Canada. When the app was in the beta stage, improvements were made to the audio-syncing capabilities and compatibility. It also has support for electronic instruments.

Samir Maharjan - May 31, 2021
0
Windows Package Manager is the native package manager for Windows to download or update programs from its official source without the need to worry about compatibility and searching all around with a single command.
Read more

Samir Maharjan - June 5, 2021
0
I tested five new NAS devices, 4 of which were 2 Bay and 2 of them which were 4 Bay; and compared to see which would fit best for me as a home user.
Read more

Samir Maharjan - December 21, 2020
0
Spyware sold by an Israeli private intelligence firm was allegedly used to hack the phones of dozens of Al Jazeera journalists in an unprecedented cyber-attack that is likely to have been ordered by Saudi Arabia and the United Arab Emirates, according to leading researchers.In...
Read more

Samir Maharjan - January 6, 2021
0
There are situations where you would want to clone the entire drive. Whether you are upgrading or migrating the entire windows installation, disk cloning is your way out.There are a lot of great services in the market that does the job done perfectly...
Read more
© 2023 GeekCrawl.com - All Logos & Trademark Belongs To Their Respective Owners