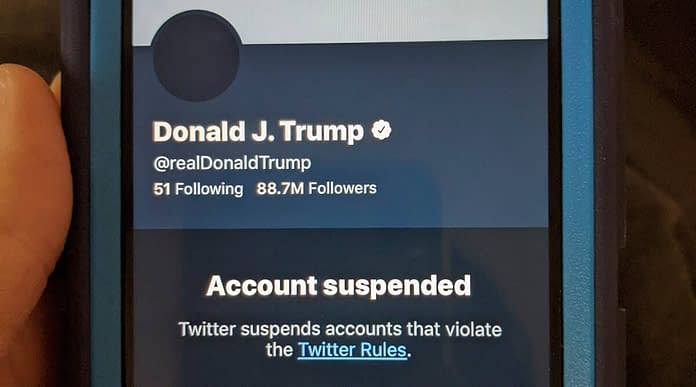 “After close review of recent Tweets from the @realDonaldTrump account and the context around them we have permanently suspended the account due to the risk of further incitement of violence,” Twitter said in a statement Friday.

The ban comes after the president incited a mob that broke into the US Capitol building, disrupting Congress’ certification of Joe Biden as the President Elect. Twitter initially put a 12-hour ban on Trump’s account for “repeated and severe violations of our Civic Integrity policy” after he posted messages repeating lies that the election was stolen.

At the time, Twitter said Trump would be banned permanently if he continued to violate its rules, including those around civic integrity or violent threats. Twitter said in a statement Friday that two new tweets posted since Trump’s initial suspension violated the platform’s rules, prompting the permanent suspension.

“Due to the ongoing tensions in the United States, and an uptick in the global conversation in regards to the people who violently stormed the Capitol on January 6, 2021, these two Tweets must be read in the context of broader events in the country and the ways in which the President’s statements can be mobilized by different audiences, including to incite violence, as well as in the context of the pattern of behavior from this account in recent weeks,” Twitter said in its Friday blog.

Twitter decided the new tweets were “highly likely to encourage and inspire people to replicate the criminal acts” at the Capitol, and shared its reasoning in five parts:

President Trump’s statement that he will not be attending the Inauguration is being received by a number of his supporters as further confirmation that the election was not legitimate and is seen as him disavowing his previous claim made via two Tweets (1, 2) by his Deputy Chief of Staff, Dan Scavino, that there would be an “orderly transition” on January 20th.

The second Tweet may also serve as encouragement to those potentially considering violent acts that the Inauguration would be a “safe” target, as he will not be attending.

The use of the words “American Patriots” to describe some of his supporters is also being interpreted as support for those committing violent acts at the US Capitol.

The mention of his supporters having a “GIANT VOICE long into the future” and that “They will not be disrespected or treated unfairly in any way, shape or form!!!” is being interpreted as further indication that President Trump does not plan to facilitate an “orderly transition” and instead that he plans to continue to support, empower, and shield those who believe he won the election.

Plans for future armed protests have already begun proliferating on and off-Twitter, including a proposed secondary attack on the US Capitol and state capitol buildings on January 17, 2021.

“We must examine Twitter’s complicity in what President-Elect Biden has rightly termed insurrection. Those acts jeopardize the wellbeing of the United States, our company, and our employees,” the employees wrote in the letter.

On Thursday, Facebook put an “indefinite” ban on Trump that it said would last at least through Inauguration Day. Facebook CEO Mark Zuckerberg said the risks “are simply too great” to allow Trump continued access after he used the platform to “incite violent insurrection against a democratically elected government.”

The suspension has been a long time coming. For years, Twitter has faced pressure to remove Trump from its platform due to the large megaphone it’s offered him to spread hateful language and lies. The company justified his continued presence on the platform as being in the public interest.

Samir Maharjan - May 31, 2021
0
Windows Package Manager is the native package manager for Windows to download or update programs from its official source without the need to worry about compatibility and searching all around with a single command.
Read more